María Álvarez was born in Luanco in 1958. If in her first works documented by the 80s, the influence of Paul Klee is clear, soon will be the neo-expressionist current that, around 1989, will carry matter and gestured her works: American Dreams, Albertina, Kleist in Thun …, white series of action painting, meeting and disagreement with matter in its purest state.
Her vitality and adventurous spirit will lead her, in the 90s, to look for new, more conceptual forms of expression. If art is a concrete representation of intimate feelings, his work of this era is a good example of it; but it is also from his latest works, where there is a determined commitment to a detachment of the superfluous to transcend beyond forms: Un mar de dudas (2004), Sinsentido (2006), En busca de la artista desaparecida (2008) .
Her current career takes away from the expressive and informal graphics that characterized her first works. Only in appearance because the warmth of her style and series, which as an obsession, lead her to exhaust the motive, are still present. There is also the fragment and its many possibilities that increase the scale of the work. The format, small and close, that encourages the observer to an intimate approach is maintained and there is the economy of means and resources, reductionism that leads to the limit. 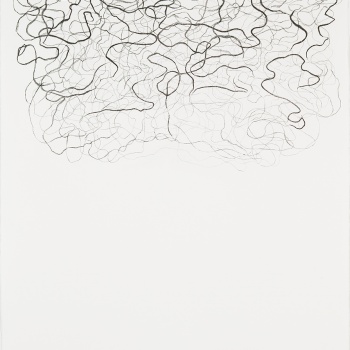